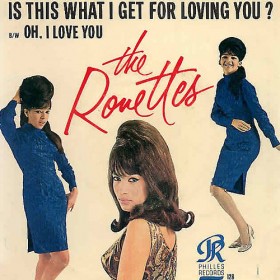 TIME Magazine critics have selected “Be My Baby,” produced by Phil Spector, as one of the 100 most extraordinary pop recordings in music history. The magazine writes:

“The Wall of Sound was a fuzzy, congested, massive sonic assault designed for 45-r.p.m. record players and AM car radios. Summoning an army of musicians — backup singers, guitarists, a few horn men, percussionists with their castanets, maracas and tambourines, plus three or four pianists banging away simultaneously and maybe a string section — to his cramped, beloved Gold Star studio in L.A., the producer would keep noodling and cajoling until he heard the magic that was already in his head. By the time he was done, the number exploded with a sound so dense and intense that a record needle could literally jump out of the grooves. Spector’s target audience of adolescents got the same vinyl jolt. Even today, it’s impossible to listen to “Da Doo Ron Ron,” “He’s a Rebel,” “Then He Kissed Me,” “Not Too Young to Get Married” — or “Be My Baby” — without feeling elated, intoxicated and 15.”