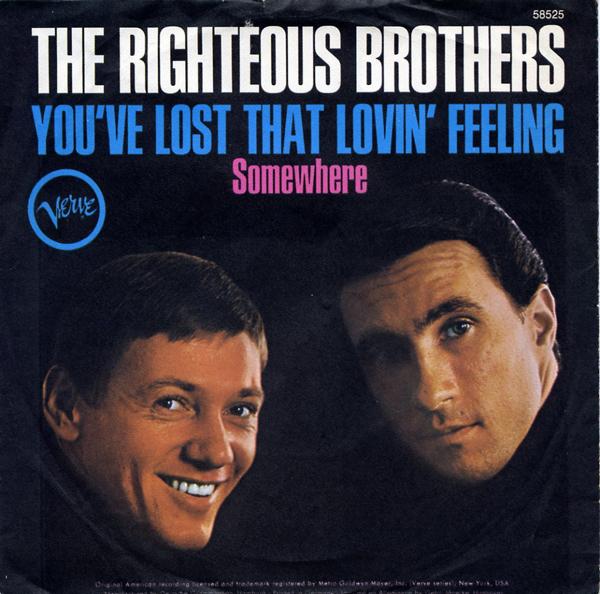 The Righteous Brothers’ 1964 single, “You’ve Lost That Lovin’ Feelin,'” produced by Phil Spector, is among 25 recordings selected this year to be inducted into the Library of Congress’ National Recording Registry.

Under the terms of the National Recording Preservation Act of 2000, the Librarian of Congress each year selects 25 recordings that are “culturally, historically or aesthetically significant” and at least 10 years old.

“You’ve Lost That Lovin’ Feelin’ ” (single) – The Righteous Brothers (1964)
This is the epitome of Phil Spector’s Wall of Sound, a carefully layered assemblage of sound combinations, often enhanced by echo. Spector, who had recently signed The Righteous Brothers (Bill Medley and Bobby Hatfield) to his Philles label, asked the husband and wife team of Barry Mann and Cynthia Weil to write a song for them. Inspired by the yearning of “Baby, I Need Your Loving” by The Four Tops, they took their draft to Spector, who suggested a riff from “Hang on Sloopy” for the bridge, which they liked, and added the vocal “whoa-whoa-whoas,” which they didn’t. At first, Medley and Hatfield thought the high harmonies of the demo were wrong for them, but Spector kept lowering Medley’s opening part to the point that when Mann heard the finished version, he thought it was being played at the wrong speed. Recorded at Gold Star Studios in Los Angeles, Spector crammed the modest-sized Studio A with musicians, including multiple guitars, basses and pianos. According to engineer Larry Levine, the resulting microphone leakage contributed to the Wall of Sound effect. Another key was the cement-lined echo chambers in Studio A, used on both the instrumental track, which was recorded first, and the vocals, which were done weeks later. The results were mixed into a 45-rpm mono masterpiece. Unfortunately, at nearly four minutes, the final recording was too long for most time-conscious disc jockeys, so Spector purposely misprinted the running time as 3:05, a fact referenced years later by Billy Joel in his song “The Entertainer.”

Read more at The Hollywood Reporter.